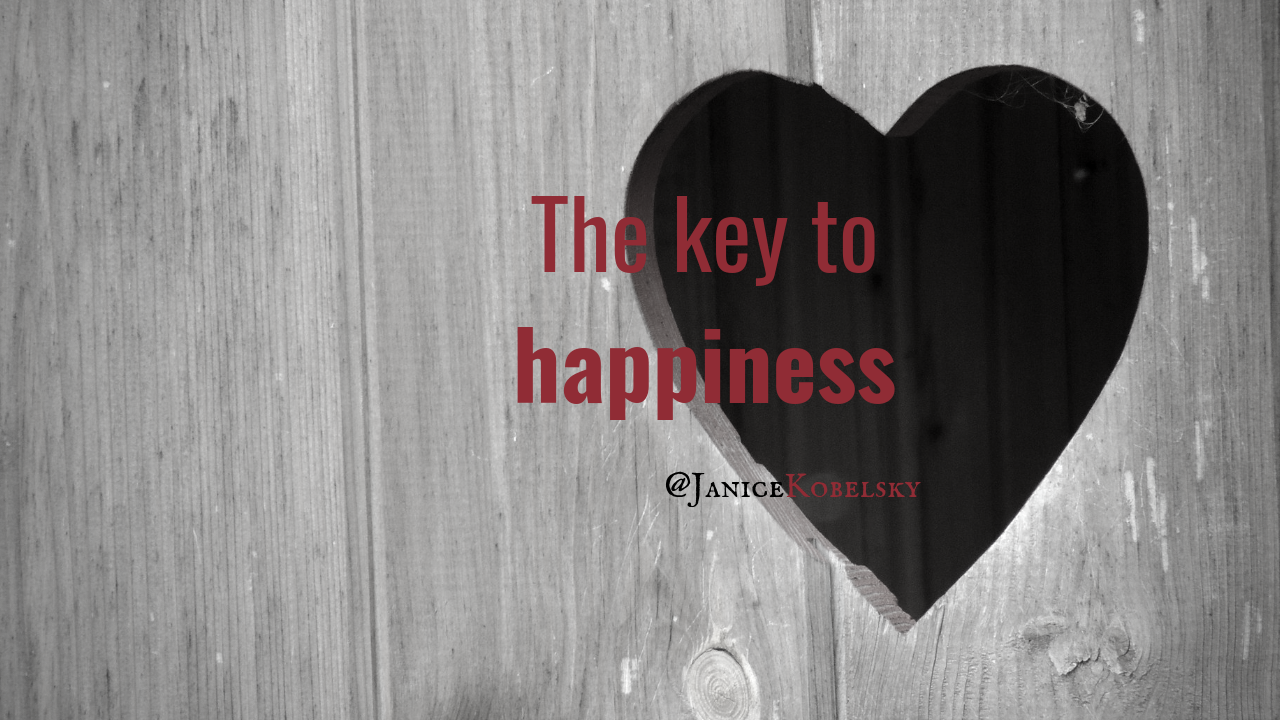 The Key to Happiness?

A RACE to ZERO.

I read the words. In an instant, that voice of self-doubt and 'not enough-ness' began screeching in my inner ear!

Comparing yourself to others is tough.

Comparing yourself to how you 'should' measure up is discouraging.

My good friend was outlining possibilities for success, and all that 'could be'. But all I was hearing (and seeing/imagining with his words) was a defeatist foreboding.

I know I'm not the only one who does that.

I look out to the beautiful trees in my garden and I think to myself, "How awful would it be if nature did what we humans do? What if trees, flowers, wildlife tried to compete with and compare themselves to each other?"

Imagine how twisted that would be! Picture how 'gray' and faded everything would eventually become.

Instead of a mosaic of breathtaking splendour, envision this. The elements of nature trying to imitate, while one-upping, each other. All shades of uniqueness becoming horribly distorted and blurred. A race to zero.

Maybe I was overtired. Whatever the reason, I couldn't see my friend's intended vision of possibility. I wasn't capturing the motivation and encouragement. All his words summoned up in me was a feeling of failure.

It was like being part of a relay team. Seeing your partner sweating, giving their all, approaching... closer... . Extending the baton, straining to pass. And you, reaching... as in a slow-motion dream. The baton slipping. Dropping away. Bouncing off into the gutter.

Discouragement began creeping over me, like a cold, wet, dismal shroud. I wanted to crawl inside it, curl up, and quit.

I did let the feeling be what it was and have its way with me for a bit. I knew I couldn't stay there long, but it felt like it was telling me something and I didn't want to suppress its call. I also knew that, like any emotion, I didn't need to act on it. I could appreciate the blur and dullness for a bit and not let it morph into anything bigger or more insidious.

I looked out at my trees. I marvelled at their stateliness and grace. I reminded myself that I could just 'be'.

Success... Failure... Possible; or not. Opportunity; or whimsy.

I doubt there's a person among us who hasn't had some kind of similar experience or thought process. It's especially true of entrepreneurs, sales professionals, teachers, leaders. You can probably relate with that sense of falling short, if difference-making is part of your make up.

I decided to spend the better part of that day in quiet rest and reflection. Thinking about success. What it is. What it means.

Not as some frantic, competitive 'race to zero', but as an unfolding that empowers and energizes our best.

I believe in serendipity.

Sure enough, later that day, I saw the following tweet:

Leadership is creating a grip for those who need to climb. #ServantLeadership

Perfect timing! Anthony's tweet sparked my zest for what I like to think of as the 'craft' - the 'calling' - of leadership.

"Creating a grip." What an image!

Anthony thanked me back, with this:

Thank you Janice, just think of all the people you have personally helped make the climb.

His original tweet inspired me, as his wisdom and perspective on leadership always do. But these words went straight to my heart.

They awakened in me a bigger truth than the voice of self-doubt was shouting.

The effect? Anthony's brief - but caring - message pulled back that miserable shroud I'd been under all day, revealing a kaleidoscope of impact potential. Difference-making. The impact I choose consistently to create.

Success -- for me -- not being the climb. Certainly not measurable against others' climbs.

Success - instead - being and creating the grip.

This wasn't some fluff. It took no convincing. It wasn't ego or pride, either. Instead, I instantly had a flood of specific examples come rushing in. It was clarity.

It's summed up by something said of me recently by a cherished colleague. He is a master strategist, financial and wealth analyst and counsellor. Being a numbers guy, his metaphor was telling. It was also delightfully unexpected and appreciated. Introducing me to his team, he said,

"If you viewed one's career trajectory like a graph, you would see a definitive "delta" (i.e., shift or change) in all those Janice has worked with."

I loved the visual imagery of that thought. I liked what came next even better! :)

"And, if she were to receive even the smallest fraction percentage of the delta, she would be the wealthiest person any of us know," he further asserted.

"I am," I thought. "I am the richest person we know. Not necessarily by others' measure of success, but surely by my own. Not in monetary wealth, but by the privilege and grace to contribute and to make an impact."

I also grinned inwardly. How like him to see that in numbers and to express it as a 'delta'! It boosted my motivation. Better still, it helped his team realize the opportunity of our day of learning. We all became even more open to energizing our own and each other's potential.

Earlier that day, as I got caught up in the voice of my own inner critic, I'd forgotten about that example. Instead, I'd been lingering in self-doubt (and self-created misery). Such a waste!

Truth told, I'd also been too busy and engaged in creating the delta. Being and creating the grip. Living and leading 'on purpose.' My purpose. Forgetting that purpose without self-care leads to vital exhaustion.

So Anthony's words jarred me back into the reality of my own definition of success.

We need to be like nature. Be the best version of ourselves; not some 'wanna-be' version of someone else's idea of what success 'should' be.

The key to happiness?

In all my posts - and true to 'creating a grip' - I like to leave you with something practical and edifying, to take away.

Today, it's this: "the key to happiness." Entrepreneur, author and CEO, Gary Vaynerchuk said it this way: 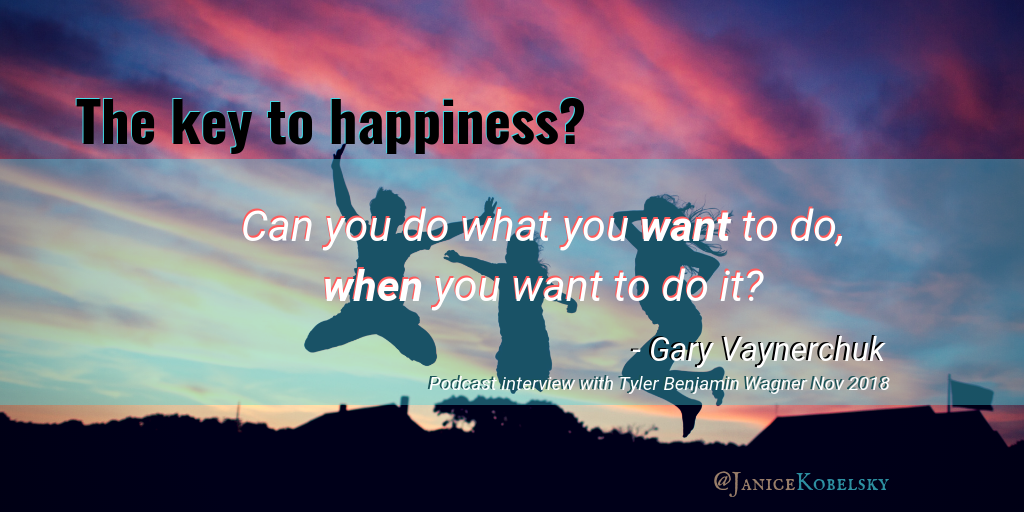 Do what you WANT

This is not a selfish, or self-indulging thought. It's having the courage, the inner strength and the sheer 'will' to explore and discover what that is. What do you want? What is success, for you? Think Be and Do; not just Have.

Then, act accordingly. Step in that direction. Do what you WANT. For real. Create the inner and outer freedom to express your uniqueness and the best version of you. Do it through your work, your actions, your attitude and leadership.

Don't wait. Imbue your action with purpose. Not tomorrow. Not in a week, or a month.

Don't worry about 'drinking the lake' all at once. No need to drown.

All great accomplishments happen one small step, purpose-infused action at a time. All the time.

The shroud lifted. I remembered my purpose. I had paused long enough to stop being so busy with it, that I lost sight of it.

I started to 'do what I want.' I did it 'when I wanted.' Heart and head sync'd up again. I became 'the grip' that I am -- enjoying the climb of my choosing.

You can too. It's the key to happiness.

My motto is, "Your Meaningful Vision, Fulfilled." It's about making a difference. Empowering you to achieve your aspirations and vision for success. Energizing people, possibilities, potential.

Let's connect. We are so much stronger, together.

Please take a moment to pay it forward.

As Anthony said in his tweet: "create a grip for those who need to climb." How? Share this post? Drop a note to someone? Write your own perspective? Maybe it's the 'key to happiness' that someone else is looking for right now! It is good leadership.